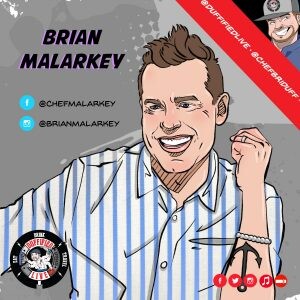 Chef Brian Malarkey! The outspoken chef has been showcasing his culinary talents up and down the West Coast for a few years before settling in the San Diego/Orange County area!

His latest venture, Animae, is an interpretation of Pan Asian American cuisine that is inspired by the stunning, modern architecture of the building where the restaurant is housed.

Malarkey also serves as the Partner of eight other concepts in San Diego and Orange County, including Herb & Wood, Herb & Eatery, Herb & Sea, NIMA Cafe, Farmer & The Seahorse, and two Green Acre locations, and Herb & Ranch in Orange County. He was the founding executive chef/partner of Searsucker and Herringbone restaurants, which sold a majority stake to Hakkasan Group in 2014. Under his guidance, the brands expanded both across the country and internationally to 10 locations. In 2018, Malarkey resigned from Hakkasan Group to focus on the Puffer Malarkey Collective restaurants.

Currently a contestant on Bravo’s Top Chef All-Stars and past Top Chef finalist, Malarkey appears as a judge on Food Network’s Guy’s Grocery Games, makes regular appearances on the Today Show and Good Morning America, and was the winning mentor on ABC’s The Taste, which he co-hosted alongside Anthony Bourdain, Nigella Lawson and Ludo Lefebvre. Malarkey has judged a variety of television cooking programs, including Rachael vs. Guy: Kids Cook Off, Chopped All-Stars, and Cutthroat Kitchen, and can be seen headlining food and wine festivals around the country.