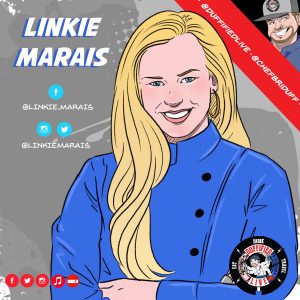 Chef Linkie Marais is a South African Native turned 20 year United States Fanatic! I met Linkie in an airport in Amsterdam. We were all catching a connecting flight to fly to the Middle East on a tour for The Messlords. Imagine seeing a 5’9″ blonde chef walk into the spa where you’re able to take a nap and get a massage at the same time.

Linkie has traveled the world for food and has seen her share of fun and excitement. Being the chef for a yacht, she gets the best of both worlds when it comes to cooking and traveling but being a contestant on The Food Network’s “Next Food Network Star” in 2012 showed her a world of reality television that has assisted her career in many ways. Her new celebrity has led her to be able to host food events and cook all over the world. With her signature accent and knowledge, she has been able top pair up with Green Egg as one of the grill masters and utilize their products to bring you some of her flair!

From a trip top the Middle East to a trek through Alaska, this episode touches on all sorts of fun. If you don’t know Linkie…..you will now!