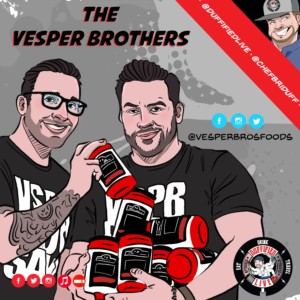 Coming from southwest Philadelphia, John and Bill Vesper are Italian twins whose father opened a deli. They grew up in the family business but wanted to take it to the next level. The entrepreneurial spirit takes over and they open two more delis.

Then, they make let us make some of Grandma’s sauce and they say to themselves, “Let’s see if we can sell any.” The next thing you know, the twins now own Vesper Bros. Food and are beginning to look at a massive growth due to their hard work, creative brains, and a set of balls!

Chef Duffy and the guys talk about family, work, the secret to their success, and so much more in this episode of Duffified Live!